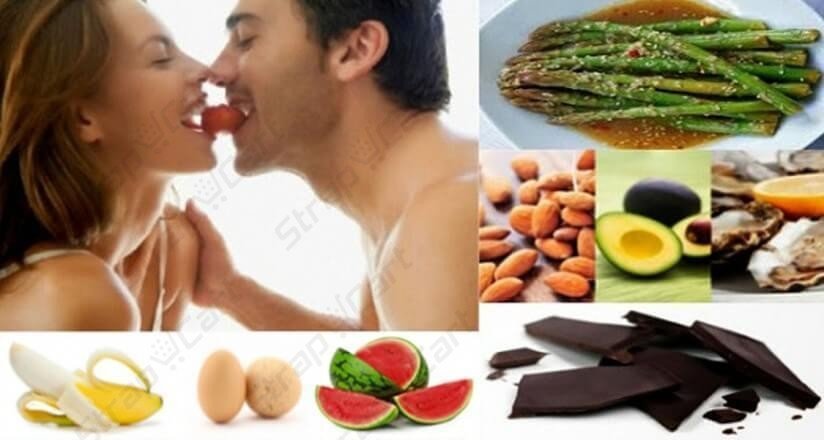 Did you know that there are foods that can naturally increase your libido,  boost your reproductive health and spark your sexual appetite?

Spice up your sex life by adding these foods to the menu:

Wild salmon and other cold-water fish (such as sardines, herring, trout and anchovies) are guaranteed to boost your sexual stamina and overall health as they are so high in omega-3. These essential fatty acids are critical to the healthy function of your brain and nervous system, fight depression and improve your mood, memory and brain power.

This refreshing summer fruit is rich in L-citrulline, an amino acid that helps improve blood flow to the sexual organs. It’s like Nature’s Viagra – without the side effects. L-citrulline optimises blood flow in the body by first converting to L-arginine and then to nitric oxide, which is involved in dilation of the blood vessels. Low levels of nitric oxide are associated with mental and physical fatigue and sexual dysfunction.

Dark chocolate’s many benefits are well documented, including its ability to mimic the sensation of being in love. Few people will argue with the fact that chocolate makes one feel really good. This is not just because of the taste and texture, it’s also thanks to a chemical in chocolate, called phenylethylamine (also called the “love chemical”), believed to produce the feeling of being in love. Research has also found that women who enjoyed a piece of chocolate every day had a more active sex life than those who didn’t.

Asparagus has been considered a successful aphrodisiac since ancient times. And, it seems, for good reason. This vegetable is rich in potassium and folic acid, a B vitamin that helps increase the production of histamine, which is important for a healthy sex drive in both men and women.

Oysters boost dopamine, a “feel-good” hormone that increases libido in both men and women. These shellfish are especially important for men, though, as they are very rich in zinc which is essential for testosterone production and the maintenance of healthy sperm.

Blueberries are high in antioxidants and have the capacity to relax the blood vessels, thereby allowing improved circulation. This, in turn, means better blood flow to the sex organ and stronger erections. Blueberries also rule when it comes to the boosting the dopamine levels, as they give the body a greater ability to release this feel-good hormone.

Though the thought of garlic might not immediately conjure up romance, it is said to be a powerful aphrodisiac as it contains allicin, a compound thought to improve blood circulation and improve sexual performance by increasing blood flow to the sexual organs.

Avocados help to increase both male and female libido as they are a great source of folic acid, which assists the body in metabolising proteins and providing energy. Avos are also rich in vitamin B6, which improves male hormone production, and potassium, which increases female libido by helping to regulate the woman’s thyroid gland.

Peanuts are great libido boosters, especially for men, as they are a rich natural source of L-arginine. This amino acid helps improve sexual function in men by relaxing blood vessels. Preliminary studies have also found that L-arginine may help with erectile dysfunction because of this effect on the blood vessels.