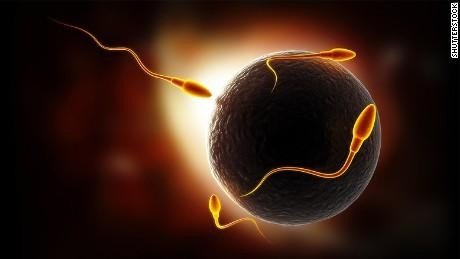 If your quest to get pregnant isn’t going so well, don’t automatically assume that you’re the culprit. Though women usually get most of the blame for fertility problems, a third of cases are caused by issues related to the man (one third is due to the woman, and the remaining cases are caused by a combination of problems in both partners, or for unknown reasons). For men, many fertility troubles are due to problems with their sperm, and the 12 factors below may all negatively impact those swimmers. (Heal your whole body with Rodale’s 12-day liver detox for total body health!)

Calcium channel blockers and beta blockers (frequently used to treat high blood pressure), as well as chemotherapy and other cancer treatments are common meds that can interfere with sperm production, de Quadros says. She recommends that men who are trying to conceive talk to their doctor about all medications—prescription, over-the-counter and dietary supplements—to determine whether any of them might affect the quantity or quality of sperm.

Packing extra (or too few) pounds

Add sperm to the list of things affected by the number on the scale. Being overweight can impact sperm count, sperm motility (the way it moves) and sperm morphology (its size and shape). That’s because excess fat converts testosterone to estrogen, and excessive estrogen is detrimental to sperm growth and well-being, says Shahin Ghadir, MD, FACOG, an ob-gyn and reproductive endocrinologist who is a founding partner of the Southern California Reproductive Center. Being underweight can also have a negative effect on a man’s sperm, according to some studies.

Long story short, the advice here is the same as it would be for women who are trying to conceive: Get to (and maintain) a healthy weight.

Nope, this isn’t a crazy myth. If a man’s family jewels get too hot, it can mess with sperm production. The reason the testicles hang low outside of the body is because they need to be cooler than body temperature to properly produce sperm, says Shona Murray MD, FACOG, director of advanced reproductive medicine at the University of Colorado School of Medicine. So if a man continuously gets them up to or above body temperature, he may start to have problems, she adds. That means your partner should skip the sauna, hot tub, steam room, and heated car seat if you’re trying for a baby. His laptop can also make things a little too toasty, so have him use it on a desk or table instead of on his lap.

Being a couch potato

If your husband spends hours vegging out in front of the television, it could affect his boys. A study published in the British Journal of Sports Medicine found that men who watched more than 20 hours of TV a week had a 44% lower sperm count than those who watched almost no TV. But it’s not the actual TV viewing that depletes the sperm count; it’s the hours spent being inactive. Time to get up and moving!

Some illnesses can cause a temporary drop in sperm count. “If a man is ill with the flu or something else that causes a high fever, that can drop the sperm count for a couple of months,” says Elaine de Quadros, DHSc, a board-certified andrologist and technical laboratory supervisor at The Fertility & IVF Center of Miami. Think about it: If he has a fever, his whole body gets overheated, testicles included. And there’s a reason his count doesn’t jump back up once the fever is gone. The time between when a sperm starts being produced and when it shows up in the ejaculate is about 72 days; even if the fever was only for two days, it can be 2 or 3 months before sperm count recovers, says Murray.

Many studies have shown that smoking cigarettes reduces a man’s sperm count, and increases the number of immobile and abnormal looking sperm. And a recent study published in the journal Reproductive Health showed that how much the man smokes determines the degree to which sperm are affected: The more times he lights up each day, the lower his sperm count (and the higher the number of abnormal looking and moving sperm). Add this to the list of reasons to quit!

And if he’s smoking something other than tobacco, that has to go too. “Marijuana and other illicit drug use has clearly been shown to affect sperm quantity and produce poor quality of sperm,” Ghadir says.

Speaking of vices, a java or soda habit could also affect what happens below the belt. A study of Danish men found that sperm count and sperm concentration were slightly reduced in men who had a high soda and/or caffeine intake. No, he doesn’t have to give up his morning cup of Joe or mid-day can of soda completely, but Ghadir says men should limit their caffeine consumption (including coffee, tea, soda or energy drinks) to 1 to 2 cups a day.

A study published in the journal Fertility and Sterility found that psychological stress can reduce sperm concentration and increase the amount of abnormal sperm. And it’s not just mental stress. “I’ve seen people who have been training for marathons and ultra running races whose sperm counts really drop at the time they’re physically stressing their body to that extreme,” Murray says. Try to encourage your other half to get enough sleep, eat well, exercise regularly and spend time unwinding to help keep his stress levels in check.

Research has linked many chemicals and toxins, like pesticides, solvents, and heavy metals, to decreased sperm count and increased sperm abnormalities. If your partner’s work places him around toxins, he should wear protective clothing and a face mask, and make sure the area he works in is properly ventilated. He can reduce his exposure to pesticides by eating organically grown fruits and vegetables (especially these dirty dozen), and also reading and following the label when using pesticides in or out of the home. Another possible sperm snatcher is BPA, a chemical found in hard plastics like water bottles and food containers, and in the lining of aluminum cans. A study published in Fertility and Sterility reported that men with higher levels of BPA in their urine had lower sperm counts and quality than men who had lower levels. To limit BPA exposure, avoid microwaving plastic food containers, don’t use plastics with recycling code 3 or 7, opt for fresh or frozen foods over canned whenever possible, and buy glass or stainless steel rather than plastic or cans.

Yet another thing to blame our phones for: “There are some studies that show cell phone radiation can decrease sperm count, decrease sperm motility and morphology, and cause DNA damage,” de Quadros says. The only way to eliminate the risk completely is getting rid of the phone, and since that’s not likely to happen, men should keep it as far away from their testicles as possible. Instead of his pants pocket, he should use his shirt pocket, carry it in his briefcase, or put it on a table or desk when possible.

Testosterone supplements, often prescribed for low libido, and anabolic steroids, which are usually used illegally to build muscle and body mass, have a huge effect on your man’s swimmers. And the reason is pretty ironic. “When a male is on testosterone, it tricks the body into thinking the hormone levels are elevated, which causes it to shut down the production of testosterone,” de Quadros says. Testosterone is necessary for the body to create sperm, so no testosterone means no sperm. The shutdown lasts the whole time the man is on testosterone. “The good thing is if he hasn’t been on it too long and it hasn’t caused any permanent damage, after 3 months of discontinuation he’ll start producing sperm again,” de Quadros says.

If your guy knocks back a drink or two after work every day, he could also be knocking down his sperm numbers. A study published in the journal BMJ Open found that men who had 5 or more drinks in a typical week had a lower sperm count and a lower percentage of normal sperm than men who had only one drink a week. And men who drank the most heavily—40 or more drinks a week—were affected the most. They had a 33% reduction in their sperm count compared to men who had only 1 to 5 drinks weekly.