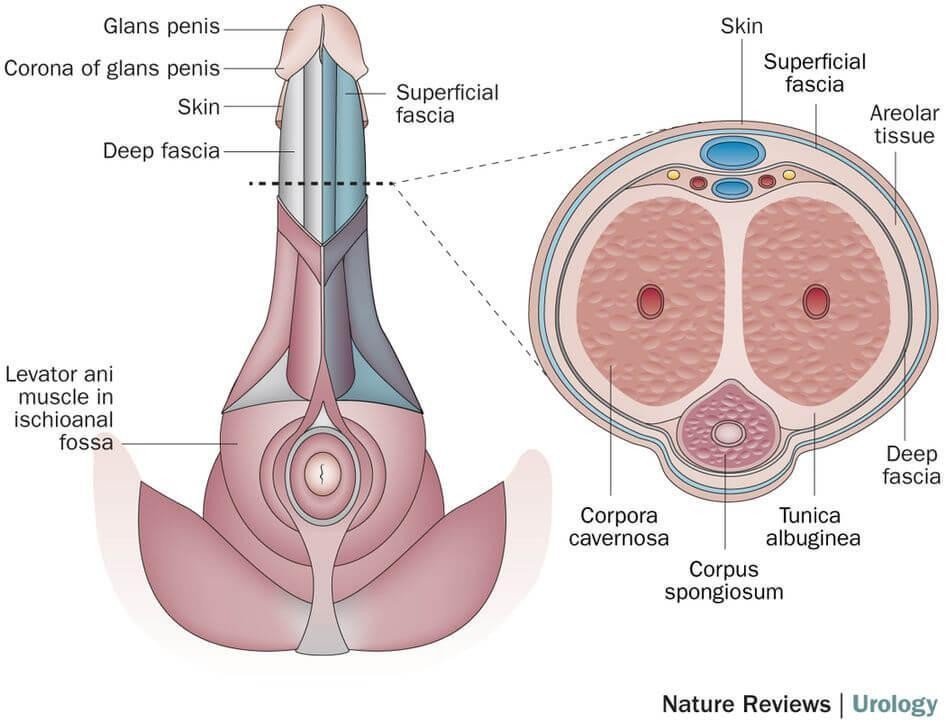 Soft glans syndrome may be defined as a sexual arousal disorder in which the corpora cavernosa of the penis are fully erect but the corpus cavernosum and the glans penis remain soft and cold, thus adversely affecting both the appearance of the erect penis and the ability to achieve penetration during sexual activity. There are no epidemiologic studies concerning the prevalence of the soft glans condition. Few physicians make inquiries to patients with sexual dysfunction whether the glans penis engorges and gets firm during sexual arousal. Specifically, the most commonly utilized psychometrically-valid measure of male sexual arousal does not address glans engorgement or glans firmness.

There are three suspected pathophysiologies of soft glans syndrome. There is “failure to initiate” soft glans syndrome. In this condition, neurologic injury involving the motor nerves innervating the corpus spongiosum result in an inability to activate the arterial inflow and veno-occlusive processes within the spongiosal erectile tissue. This may occur post-urethroplasty for urethral stricture disease.

There is “failure to fill” soft glans syndrome. In this condition, arterial occlusive disease within the dorsal or spongiosal arteries result in an inability to provide sufficient arterial perfusion pressure to the spongiosal erectile tissue. The arterial pathology may be the result of atherosclerotic disease with vascular risk facture exposure, or may also occur following traumatic arterial occlusive disease secondary to blunt perineal trauma.

There is “failure to store” soft glans syndrome. In this condition, fibrosis of the erectile tissue within the corpus spongiosum results in poorly expandable erectile tissue and an inability to provide sufficient compressive pressure on the sub-tunical venules and veno-occlusive dysfunction. Fibrotic spongiosal erectile tissue can occur with vascular risk factor exposure, blunt perineal trauma or surgical injury after urethroplasy or associated with penile prosthesis implantation. “Failure to store” soft glans syndrome may also result after iatrogenic shunts have been performed such as associated with ischemic priapism treatment.

Causes: During normal physiologic penile erection, there is increased blood flow to the two erection chambers, the corpora cavernosa via the right and left cavernosal arteries through relaxed helicine arterioles. As the corpora cavernosal veno-occlusive mechanism activates, hardness occurs within the two penile erection chambers with an increased intracavernosal pressure from 6-8 mmHg at baseline to approximately 100 mmHg during erection, and to over 1000 mmHg during the external compression associated with sexual intercourse.

If a patient complains of soft glans syndrome, the following diagnostic tests are available. Photography in the erect state can confirm the soft glans syndrome. Spongiography in the pharmacologically erect state can reveal contrast in the glans penis and deep dorsal veins consistent with spongiosal veno-occlusive dysfunction. Thermography using aForward Looking Infrared (FLIR) camera is an imaging technology that senses infrared radiation and thermal energy. Forward Looking Infrared imaging technology can be used to help pilots and drivers steer their vehicles at night, and in fog, or detect warm objects against a cold background when it is completely dark – such as a cloudy, moonless night. Forward Looking Infrared can be used to assess blood flow in tissues. The skin/glans of the penis constantly emits infrared radiation. It is possible to detect increases in infrared radiation emission from the skin/glans of the penis by remote sensing using a high-resolution, fast-scanning camera that can produce thermal images with a precision of 0.07 degrees C in a very short period of time.

The most outcome data concerning local pharmacologic data is with the use of Medicated Urethral System for Erection (MUSE). MUSE provides a novel delivery system that permits the intraurethral administration and absorption of alprostadil through the urethral mucosa to the corpus spongiosum. Resultant smooth muscle relaxation and vasodilatation lead to engorgement and tumescence of the corpus spongiosum, including the glans penis. MUSE has been used to successfully treat men with soft glans syndrome following penile prosthesis insertion. A total of 28 men aged 47-81 years with a penile prosthesis were treated with alprostadil (250-1000 μg; mean, 566 μg). Sixty-one percent reported decreased glans penis engorgement. A total of 10 of 17 (59%) with soft glans syndrome were satisfied with MUSE treatment.

In summary, soft glans syndrome may be more common than previously appreciated. Advances in diagnosis may be forthcoming using forward looking infrared.