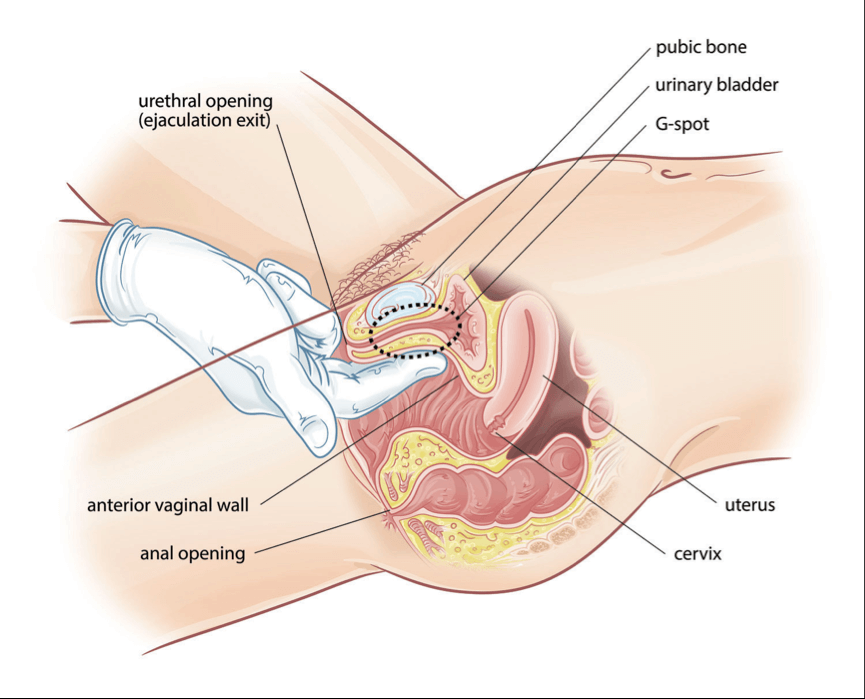 Female ejaculation is the expulsion of fluid in a noticeable amount from the urethra of women during orgasm. It is estimated that between ten percent and forty percent of women are able to ejaculate.

Female ejaculate can differ in appearance, texture and quantity. It can range from being a clear to a milky liquid, or from feeling watery to feeling sticky. Amounts can range from a teaspoon, to (in some extreme cases) a cup full.

What does female ejaculate consist of?

Ed Belzer, a professor at Dalhousie University found varying amounts of acid phosphotase in female ejaculate. It was previously believed that only males produced this chemical in the prostate gland.

Though it is not entirely clear what female ejaculate is made up of, researchers have concluded that it is not purely urine, and that it is not the odourless secretion of the Bartholin gland that helps lubricate the vaginal tract, but a combination of urine, acid phosphotase and other inconsistent chemicals.

These studies have also shown the existence of a prostate-like gland within females, previously thought to be non-existent.

How is female ejaculation achieved?

The percentages of women that do ejaculate do so during orgasm. Gynaecological studies have shown that most female ejaculation occurs during sexual stimulation of the ‘G-spot’.

As the G-spot is stimulated, it swells and begins a fluid discharge through the urethra.

What are sexual problems in men?

The definition of sexual dysfunction is the inability to have a satisfactory sexual relationship. This definition depends on each person’s own interpretation on what he judges satisfactory. In general, sexual dysfunction can affect the quality of life and, even more importantly, can be the first symptom of another medical or psychological problem. Any sexual complaint should be taken seriously and evaluated.

What is the physiology of sexual function?

Sexual activity involves coordination between various systems of the body. Hormones and neurological pathways must be in sync for sexual desire to be present. Blood vessels, nerves, and penile integrity must all be present for an adequate erection and its maintenance during the sexual relation. Muscles and nerves coordinate ejaculation achieved when the physiological passageway for sperm (from the testicles to the urethra) is present. Orgasm is a complex phenomenon that isn’t completely understood but it involves the coordination of muscles and nerves. When sexual dysfunction is present, the physician must evaluate all the possible problems in this chain of events.

How are sexual problems in men diagnosed?

Evaluation of sexual dysfunction starts with a detailed medical, sexual, and psychological history, followed by a thorough physical examination. The second step must not be overlooked because sexual dysfunction can have many causes. Sometimes, the patient’s partner can also contribute to the evaluation and could provide useful information as well.

A detailed medical, psychological, and sexual history is acquired during the interview with the physician. Some of the questions that are asked can be intimate and might cause you to feel shy to answer thoroughly. It is imperative to give the proper information, even though it is understandable that it can take time to be comfortable talking about this. Having a good relationship with your physician is always helpful.

A complete physical examination is performed including assessing the pulses in the legs and a thorough examination of the external genitalia (penis, scrotum, and perineum) and their reflexes..

One of the possible tests is a nocturnal tumescence test to evaluate nocturnal erections. Your physician might also ask for tests for penile blood vessel function or some tests of the nervous system to help differentiate between possible causes of sexual dysfunction.